Review | WHAT WE STARTED 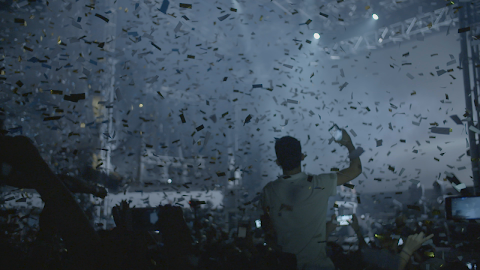 There is a kindly type of chaos of clashes that I observe when listening to tracks from Melt-Banana. Not to suggest that I play their music frequently or willingly - I'm more into 90s Alternative and Poetic Acoustic songs - but whenever a good friend of mine from college brings them or any Noise Rock band up in conversation, I'll always seek out their work and give a gander. It's all such a breaking down of structure and data streams, either for the sake of it, out of frustration at control, and/or to aggressively mix up the norm in favor of discovering something that was hidden. It can be oh so beautiful.
If you read between the beats, of course.
While Noise Rock itself isn't technically covered specifically in the documentary What We Started (now on Netflix), I do sense a spiritual origin tale that connects the two. This movie, from Bert Marcus & Cyrus Saidi, is all about the start, the evolution, the trials, the victories, and the potential future of electronic DJ led music and, by extension, the very heart of remix culture and expression itself. The film follows two working, creative, intuitive, and gung-ho disc jockeys from opposite ends of the generational shift. Carl Cox is the elder veteran, having seen and done it all, now sounding off towards retirement. Martin Garrix is the young sensation, nervous but ready to perform and learn as much as he can. In between learning about these men and following their current exploits, What We Started provides much context into electronic music via archival media and interviews with prominent figures in the birth and continuation of the genre.

More mainstream and stylish than punk and anarchic, electronic music might only share tenuous similarities with noise as it relates to freedom and equipment, but there is at least one glaring difference in how the film articulates its scene, and how noise is generally perceived as. What We Started does a very concise job at presenting a textbook definition of DJ-ing, expositing on everything from Disco (one subject reflects on public feeling on that brand at its demise as being "gay black music") to an Inner City Chicago revival to tales of struggles in maintaining creative integrity in an ever commercializing industry. However, despite the interest and fascination in the topic by the filmmakers, the documentary has a more ho-hum approach towards telling the story, never ever breaking from its trend of a safe and comfortable - dare I say bland - narrative.

I doubt that What We Started is fully representative of the electronic music scene as a whole from an atmospheric feel (certainly the concerts are more energetic I believe), but the documentary gives me the impression, based on its surface-level exploration and avoidance at "discovering something that was hidden", a Noise Rock film might be much more daring and deep by virtue of the built-in revolutinary punk-ness and obscurity of the musicians its artists. By no means is What We Started bad or unwelcome in any way for novices of that culture, but some frustration from hardcore fans and diehard DJs would be understandable, given how much of a slick advertisement this feels like.

Of course, one could argue that many a documentary can be, in one way or another, ad-like. But even in some ads there's the potential for something past the normal. Something emotionally relatable. Some form of heightened truth.

Carl Cox, in one sequence, is seen performing a recent gig to a large audience, as a clock pops up in the corner of the screen that times the show, from around 10 PM to about 9 AM. During this footage, Carl talks of his career, his age, his pains, and his passion. Where What We Started excels is in its loud and crowded but intimate and vulnerable moments of revelation. Where it falters is in its reluctance to find more of that.
Read between the beats, and you can almost always find a story that lives under the liner notes. What We Started isn't punk or altogether terribly intriguing, but it is an entrance ramp to a world many have never visited. People are usually turned off by Noise Rock (as I can be), but DJ's can tap into what makes everyone move. I wasn't tapping my foot to this documentary, but I did get a bug in my ear.
RATING: 3 / 5
documentary electronic movie movie review moviegoing music noise