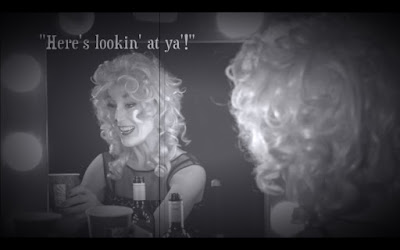 The struggle of a working mother. The sad life of an underappreciated clown. The difficulty of taking an iMovie-edited video seriously. This is Cherzoso The Silent Film.
Set in the dressing room of an undisclosed venue at an undisclosed time and place, the female clown Cherzoso appears, reappears (no discernable disappear in between), and holds a conversation in what feels like a vacuum chamber of mind and soul. Played by the director of this piece, Tracy Ann Chapel, Cherzoso is performed as if caught up in a Lost Highway emotional tragedy. The vanity mirror before her duplicates her self, forming an individual yet easily controlled doppelganger that she can speak with and through. The unreliable narrator or an impotent all-knowing being?

There are two charms to this almost six-minute short that equals an admirable and mildly entertained story, the first being its canvas. Cherzoso looks to have been cut together on pre-installed home-movie software, possibly iMovie or something of the sort. This isn't necessarily a detriment, though it is awfully awkward. Poor transitions, choppy music, inconsistency with dialogue on-screen - both in time length and spelling - almost grant this the label of being beneath amateurish. Grammar-School-Esque?

It's a charm to me though because it's this kind of software that I've often edited from, as a kid and as an adult. I'd like to think that my videos had a bit more finesse - I'm likely wrong - but that rough-edged aesthetic indicative of someone without much technical skill can also highlight that same person's passion. And here, that comes out.
The other charming note here is in the purgatory dimension setting of a dressing room. Essentially a halfway point between two entertainment fields - stage performance and what I can only speculate is meant to be sex work (another kind of performance) - the room that Cherzoso is in exists as her only place of grace, no matter how brief her moments inside may be. She brings past memories into her present, she tackles her inner turmoil in talking with people she used to know, using herself as a medium or vessel. Of course, is there anything actually supernatural occurring, or is this just how she "deals?"

Glued together with peanut butter and spackle, Cherzoso The Silent Film doesn't exactly do well in covering up its own inadequacies but does articulate some fascinating resonance in depicting the many voices that one body can carry. And, in a clown, these voices must be saying something of value. They must be.