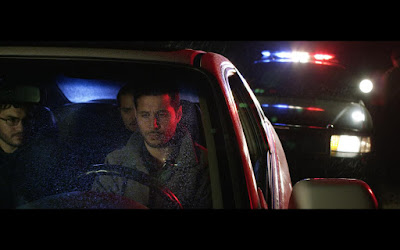 A Bro-Tastic campout reunion... from hell. Man, talk about a retreat with friends.
In Silent Panic, we have a classic-ish take on relationships under extreme pressure, on the weight of morality, on the urgency of doing the right thing, and on how one discovery can demolish long-held bonds. In the opening few minutes, we are introduced to the three main male players of the piece, picking at a campfire, telling jokes, and catching up on homelife news. This one sequence establishes very well the personal dynamics that make up each of the characters, and informs us on how they work or clash with one another. Always a good move to do at the onset of a story before the knife stabs and twists.
Too bad that the first swipe from the slasher happens prior to this scene.

The opening credits are ripped from film school thesis nightmares. Immediately, with barely a comforting or slow welcome, we see stock-like footage of raindrops hitting the pavement, a bowling ball shattering some pins, and a single Dove flying. The images alone hold various meanings, mostly around grief, the toppling of stability, and peace. It was the crispness of the digital video files and their whiplash-Esque effect on my attention and patience that got me startled. Somehow, the next ten or so minutes are pretty decent at showcasing what will ultimately be at stake for the rest of the film - souls and friendships - but a rock landed in my gut awfully early.
Written and Directed by Kyle Schadt, the title of the movie, Silent Panic, suggests a sort of inner turmoil that will be felt and expressed in tangible and resonant ways. With three male best friends, a trio of differing responses, reactions, and resolutions are to be expected. Unfortunately, this is a movie that very much revels in the de-evolution of rationality and the celebratory escalation of aggressive desperation. Surely, given the subject matter of a dead woman being found in the trunk of one's car, and the mental struggle in deciding what to do and how to deal with that choice, would blow-up in many ways, making even the more intelligent of us do dumb things. However, I suspect that what I understood of what occurs with our leads was not the intended observation. It's schlock, sirs and madams. The bad kind. Funny, but still bad.
Yes, all apologies for not explaining earlier, but the inciting incident is the discovery of a dead woman in the trunk of the car that the three buddies were using, one of whom - the owner - was just released from prison. Moving forward with the speed of sound, the friends don't even take the time to process or sorrow for what is happening. One second they're happily on their way to the car, the next they're yelling selfishly about how to avoid any responsibility, in an effort to avoid minor inconveniences. Unrealistic? Not necessarily. People can be horrible, especially normally "good" people. The problem is in the abrupt mood shift in tone and personality. No hesitation, no trickle-down descent. They figuratively just fall into a pit of despair, almost willingly, with only mild challenges presented. From here on out, it's shenanigans with cocaine, diary drivel, and nervously wacky attempts to hide, deflect and pass the buck at all costs - even to the point of carrying an uncovered corpse down the street, in plain sight on passers-by. Hey, it was a moment of absurd dark levity. I'll take it.

This ain't Hitchcockian. This ain't Corman-like. It's almost on the Bert I. Gordon level, but Silent Panic avoids that high - which isn't all too out of reach - by being completely serious. Obliviousness in filmmaking only works if you're a weirdo with an unattainable dream, like Ed Wood or Tommy Wiseau. Much of Schadt's film is fairly accomplished technically speaking, with the main failing appearing in, I'm sorry to report, the writing of the story, and the direction of scenarios. It's never bland, but it's also never within range of what it wants. What it gets at the end of the rainbow isn't exactly a Golf clap, but not quite a participation award either. Maybe a party favor?

My absolute favorite scene here has to be when Dominic, the ex-drug addict friend who is most visibly shaken by everything, visits the residence of a former dealer. This relaxed hippie-aged man no longer partakes of what his visitor craves. He and his much younger female mate - who was painting during this scene - are just hanging around, going with the flow, lighting incense, and chill. For someone just barely clinging to the cliff of calmness like Dominic, being witness to such sober grooviness isn't merely a buzzkill, but a piercing headache that's getting worse with each passing nanosecond. The volcanic anxiety was palpable. The threat was real. The stakes were high (no pun intended).