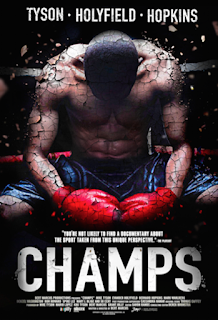 "The ultimate opponent is truth."
"Rich kids don't go into boxing. Boxing is a way out of the ghetto."

These are among the opening lines of sports documentary Champs. From Evander Holyfield to Mike Tyson to Professors of Sociology and experts of the boxing-industrial complex, we see and are privy to a wealth of talking-head style interviews with those who've lived the modern-day gladiator lifestyle all too well and felt the profound aspects of it from the high positives to the low negatives. And things do get awfully low. As a film critic and moviegoer, the most immediate reference point that comes to mind when thinking about boxing is, of course, the character of Rocky. His was a story - told over a long but ever-watchable series - of perseverance, triumph over tragedy, and romanticism towards living a better life, becoming a better man, and inspiring a whole community. It's also a tale of damage, both physically and emotionally, as a narrative method of expressing personal obstacles to overcome. Rags to riches to rags to the middle class, the arc of Balboa is one of learning, unlearning, and understanding the mistakes above the knock-out wins. It might be dramatic fantasy, but there is much truth beneath the cinematic glory that Stallone excels at.
To call Champs a thorough surprise would be a slight understatement. At few and far between points in the Ninety or so minute film was my mind drifting towards any thought other than the trauma these athletes had undertaken, and the few options they had available to them from the get-go. This isn't at all a walk-through of accomplishments, but rather a deconstruction of the myth behind the meaning that is read from competition - that sports are a living metaphor for the American Dream. Indeed, this is an accurate observation, but with the heavily promoted facade of positivity. In fact, it's a form of control and exploitation, presented as more insidious than street-level pain could ever be (though I'm sure many would beg to differ, and rightfully so).

We focus mostly on the careers of Holyfield and Tyson, two men with similar starting points but vastly different upbringings. Where Holyfield's parents - who weren't literate and had already experienced poverty well-before his birth - taught him that all he has in this life to control was himself and his behavior, Tyson witnessed mostly abuse and neglect. The fighter known for aggressive intimidation and an outlandish persona, expresses so much on his tattooed face. There's a sadness to his acknowledgment of the world he was brought into, of the world that adults lied to him about, of the prospects he felt would never be within his grasp, of the ladder rung he would never reach. What kind of damage does that do to one's mentality? Does a person have options outside of being a proverbial "pitbull"?

Even if a young man makes it through the trials of a punishing childhood under such emotionally exhausting conditions, they only have further exploitation of their skills to overcome. The American Dream as Champs sees it, is equal to that of a dangling carrot. It's attractive, but ultimately an illusion of a promise. The goal is never to capture the carrot, but to capture you. To trap you. To trap all of us. The way of life for a specific few depends on this, more so than the entertainment they derive from the fights they watch on pay-per-view.
For the majority of Champs, the camera that looks at the veteran African-American boxers is an uncompromising method of self-exorcism. They're shown as vulnerable open nerves, and not of steel as we all were led to believe. They are flesh, blood, sweat, and tears, all to an absolute. The utter honesty on display, the utter boldness to not simply question the "dream" but to beat it into the ground for all of its destructive dishonesty is incredibly courageous. I was stunned. Shifting between the real-life boxers to the dramatic reenactments would eventually bleed together so vividly, the men at the heart of film would seemingly penetrate the very dream that had become their nightmare. Their main opponent.

If this is to be graded on the Rocky Balboa scale, we start at V, move to the original classic, then IV with its defeat in victory, eventually landing on Balboa, the final and perhaps most mature and personally poignant entry. Champs isn't satisfied with status quo fan-fiction that would've left every viewer with false feelings in their hearts - that, in this context, is an irresponsible copout. No, Champs wants the big prize. It wants to face the biggest rival. It wants the final win.
The only win that matters.