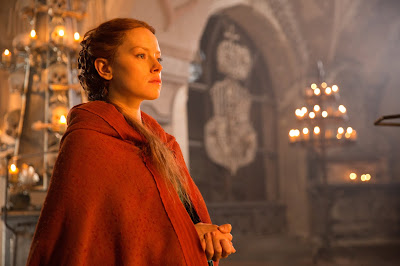 Reminiscent of a child flatly stating "I told you so!", the final coda of Ophelia feels as if it's delivered from up on a pedestal, speaking down to all of us who perhaps needed a lesson or two. Now, I don't mean the climax, mind you - which is fantastically realized and heartbreakingly experienced - but rather the last message before the end credits. The kind that repeats its thesis, expands on it, and sums everything up in a nice bow, without much care for how it'll look in doing so. This being Ophelia's perspective, an alternative take on Shakespeare's classic Hamlet, I'd have no issue with such reminders, had they not just been given to us most visually and most grand.

Ophelia is all Daisy Ridley's show (not to take anything away from the other players), who presents a range of stoicism and wisdom that is difficult to convey, especially in a character we already have preconceived notions about. Ophelia has long been considered as a poor woman gone mad by the drama unfolding around her, but here is shown having great strength, compassion, and morality. She is quick to call out those bullying and doing evil, and won't think twice about kneeing someone in the crotch. This is not done as a gimmick on the filmmakers part, despite this being the era of #TimesUp and the madness of President Trump matching King Claudius hand in hand somewhat. No, Ophelia may ride the line carefully, but is most assuredly its own tale.

With a score filled with whispers most haunting, Ophelia has a richness in design, from top to bottom. The colors are vivid, the eyes of the director and cinematographer are focused on light and shadow wonderfully, and the composition of every shot and frame matches the gravitas of the moments being depicted. Suffice to say, the craft on display is second to none, expressing the tragedy of what happened and more interestingly what could've been. Ophelia, had she been listened to at all, could've reasoned the kingdom to safety or, at least, Hamlet. But dear, the fates in our hearts conspire most deviously.

There is much made about studies of science by the men, and any such studying or learning by women is deemed witchcraft. This idea of it being a man's world most unforgiving reminds me of the recent Wild Nights with Emily, which featured Emily Dickinson's work being twisted by men in position's of power, and how the truth took time to be unveiled. Perhaps too much time, really. Hamlet may have fallen into myth (much like many other tales of old) and become truer than intended, but Ophelia does no damage in re-interpreting the narrative and, with it, forcing new observations on the history.

Still, did we need such redundancy in the end? The finale was so brilliantly rendered, only to be slightly soiled in the last few seconds. Soiled, but not spoiled. Ophelia is a great adaptation, and indeed interjects with a message that isn't heeded by the formerly main characters. Being Ophelia's take, however, she can only offer so much. Indeed, poison is all over the castle, and maybe it's best to head for the nunnery.