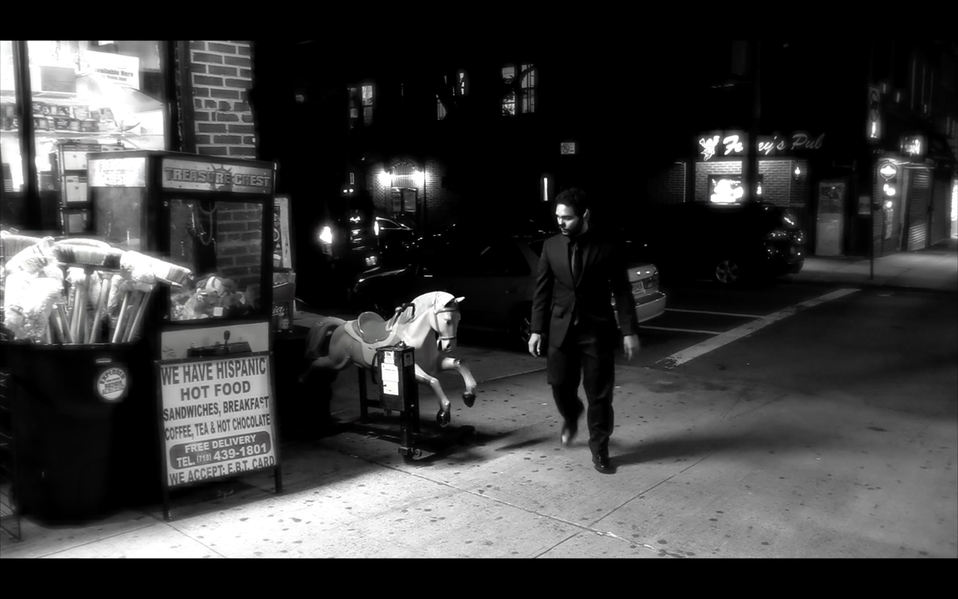 You don't go into a movie called Werewolf Ninja Philosopher expecting... well, with any expectations, really. It's almost an uncharted territory kind of thing, where even the trailer and synopsis doesn't (and shouldn't) prepare you for the viewing you'll be having. That's rare and, for this film, very on point. WNP (as I'll refer to the movie as) works as a zany romp through the self-important, self-aware, and uber-intelligent streets of NYC by way of a satirical Jim Jarmusachian take on The Naked Gun, if that makes any sense whatsoever.

We follow a man, a werewolf ninja philosopher known as "Werewolf", as he walks his way through the streets and subways of the city. These establishing and transition shots make up the bulk of the action, ultimately existing as the story itself really. In between these calm moments of slow-mo strolling, we get a semblance of a plot: There's a killer on the loose, murdering art-house filmmakers, and an NYPD liaison has hired Werewolf to investigate. His skills involve speaking ponderings into his smartphone notetaking app - about the values of pumpkin pie and from what perspective to appreciate what random theme comes into his head - and chatting with ex and current lovers about potential suspects. Gossip basically, but from an inquisitive pov.

WNP is absolutely absurd, making time and effort to f**k with its audience in groovy and surprising ways. Repetition of shots and sequences, music loops and shuffles, hard to hear audio, single/long takes with what appears to be accidental misreadings of lines (Werewolf says "time tavel" before correcting himself at one point), and mysteriously odd footage of a woman in a park that doesn't seem to lead anywhere all point to a movie poking fun, making fun, and being fun of its own stylistic comings and setting.

Perhaps the NYC Indie Film scene does suffer from pretentiousness on occasion (or on many an occasion) for better or worse, but no matter if observed as a pro or a con, director Sujewa Ekanayake understands and expands on these notions with a comedy that is straight up silly and awkward, representing the finer points of DIY filmmaking and the fewer finesse elements of cinematic invention.

Having black & white photography that harkens back to old detective flicks and to what some expect to see from some indie films of old, and an attitude most confident and sure-footed despite and in spite of its goofy handling (or intentional mishandling of themes and tropes), WNP stands as something that few may tap into and "get". I suspect that its wavelength will turn some people off, but for these individuals, I can only express some genuine sadness for not making it through to the end. One-sided conversations on missing Llamas, asking a film critic if she "likes movies", and other peculiarities occupy the mind-space of this rather uniquely structured and chuckle-inducing film. WNP almost wears out its welcome, until you understand that enduring some of it is part of the point.

Meta for the crowd that is tired of meta, aware for those who feel too woke, and rather crazy to think about, Werewolf Ninja Philosopher is the hard to believe surprise of 2019 that I was looking for. Hard to believe that I could be so turned upside down by a film and that such a film could speak to my own weirdness so acutely. It's a rarity for sure.